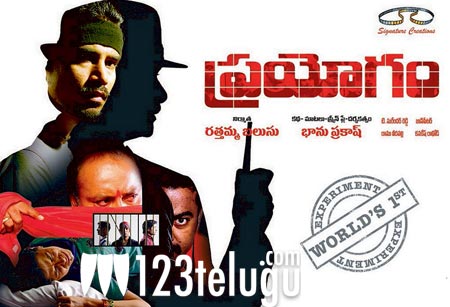 In the recent Nandi awards list, a movie by the name “Prayogam” caught everyone’s attention. This little known film which was different and liked by those who saw it, did not reach the audience and brought losses to the filmmaker and director Bhanu Prakash, who won the 2011 Nandi award for best debutant director.

At a media event organized for the occasion,Tammareddy Bharadwaja was present as the chief guest. “Bhanu has done a wonderful job by experimenting with new technology and producing a movie. Our movies should not stop with Nandi awards but go all the way to achieve National awards. To be fair to all, I am happy that this movie got selected for the 2011 Nandi awards”.

Tamma Reddy made a good point about the importance of marketing movies to the audience if it should be received well. “Taking a movie to the target audience is more important than making the movie itself. When a good movie is made, one should not spend time thinking why the audience did not appreciate it but think why it could not reach the audience well”.

The winning director said “I’ve made this movie by experimenting with many concepts that I had in my mind for a long time. Although the movie turned out to be good, it did not reach a lot of people because it was not widely available in theaters. This award has encouraged me to try and make more movies in the future”.

It is heartening to learn that budding talent such as this is being nurtured.