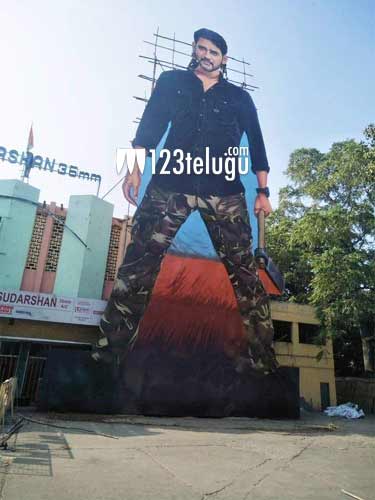 After Kollywood, it looks like the craze for erecting giant cutouts is fast gripping the fans of Telugu film stars. Several hardcore fans of Mahesh Babu have erected a massive 81 foot cutout at the iconic Sudarshan 35 MM Theater at RTC X roads in Hyderabad.

Mahesh has a humongous fan base across Nizam and most of his movies perform quite well in the region. This cutout, showcasing the Superstar from Sarileru Neekevvaru’s teaser, will only double the fans’ excitement ahead of the film’s release.

Sarileru Neekevvaru has Rashmika Mandanna and Vijayashanti in lead roles. This Anil Ravipudi directorial is being produced by Anil Sunkara and presented jointly by Dil Raju and Mahesh himself. DSP has composed the soundtrack. The film is scheduled to hit screens on January 11.