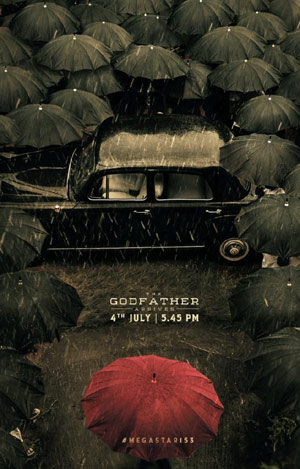 Megastar Chiranjeevi will be next seen in the film Godfather, which is his 153rd film. The film is the official remake of the Malayalam super hit ‘Lucifer’. It is a known fact that Salman Khan will be reprising Prithviraj’s role.

Now the makers took to social media and announced that the film’s first look will be out on 4th July at 5:45 PM. A poster was released to announce the same. “Make way for the Mega Menacing Arrival of the Godfather”, the production house tweeted a while ago. This update is surely a joyful moment for Megastar’s fans.

This movie is being jointly produced by Konidela Productions and Super Good Films. Nayanathara and Satya Dev will be seen in other crucial roles. The film has music by Thaman and is helmed by Mohan Raja of Hanuman Junction fame. Star director Puri Jagannadh is playing a cameo in this flick.

Make way for the MEGA Menacing Arrival of the #GodFather 🔥🔥