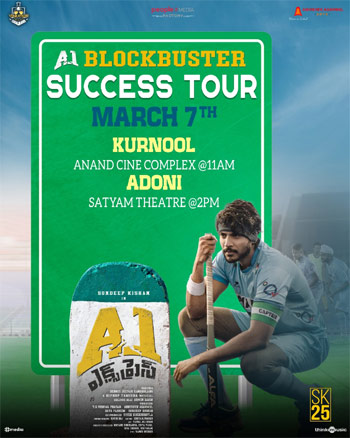 Sundeep Kishan and Lavanya Tripathi’s sports drama based on hockey, A1 Express, released on Friday and garnered a decent response. This official remake of the Tamil hit, Natpe Thunai, had registered the highest ever opening day collections in Sundeep’s career.

And to celebrate the film’s success with the audience, A1 Express’ team is all set to go on a success tour starting today. The team will first visit the Anand Cine Complex in Kurnool at 11 AM. And then, the second visit will be at Satyam Theatre in Adoni at 2 PM. The entire core team will be part of the success tour.