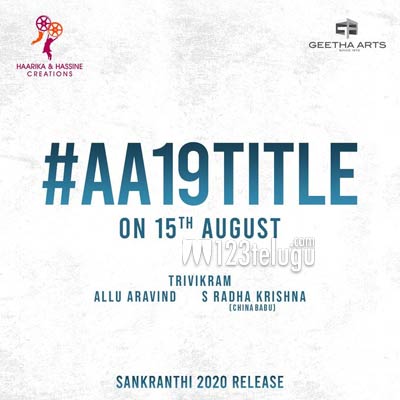 Here’s the much-awaited update. The title for Allu Arjun and Trivikram’s ongoing family entertainer will be announced on the 15th of August, on the occasion of Independence Day.

Until recently, there have been speculations that AA19 has been titled ‘Nanna Nenu’, The film is said to be showcasing a beautiful relationship between a father and son. However, we have to wait for a few more days for the suspense to be revealed.

AA19 has Pooja Hegde as the female lead. Tabu, Nivetha Pethuraj, Navdeep and Sushanth play crucial roles in the movie. Thaman is the film’s music composer and S Radhakrishna and Allu Aravind are the producers. AA19 is slated for Sankranthi, 2020 release.