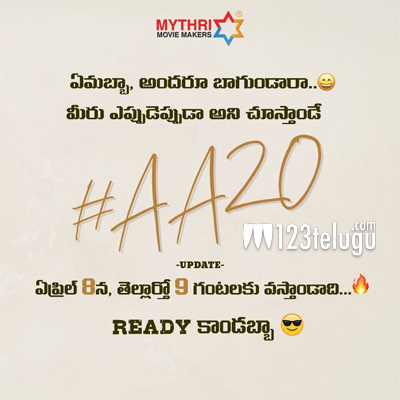 Here’s an exciting news for all the fans of Allu Arjun. On the occasion of the Stylish Star’s birthday, on April 8, the makers of his highly-anticipated 20th film will be unveiling a cool update at 9 am.

AA20’s makers took to social media this evening and released the announcement poster. Interestingly, the announcement was made in Chittoor dialect, going by the film’s Seshachalam Red Sanders smuggling backdrop. Allu Arjun is rumored to be playing the role of a lorry driver in this action drama.

Sukumar is directing AA20 and Rashmika Mandanna is the film’s leading lady. Mythri Movie Makers banner is bankrolling the project which is DSP scoring the soundtrack.