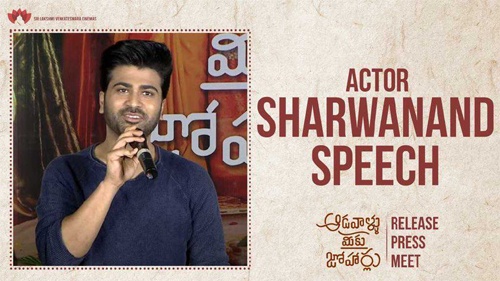 Aadavallu Meeku Johaarlu is a film that has created a good buzz thanks to crazy combination of Rashmika and Shawanand. The film will be out on the 25th of this month in a big way.

Today, the key female leads in the film met the press and spoke at about their experiences. Speaking about the film, Sharwa said that everyone will surely go out with a smile after watching the film.

He also added that it is a big achievement to act with the likes of Radhika and Khushboo and he learned a lot by interacting with them in the sets.

Last but not the least, Sharwa said that he has never seen such an professional actress like Rashmika before as she has brought a lof of charm and craze for the film. Kishore Tirumala directs this film which has music by DSP.