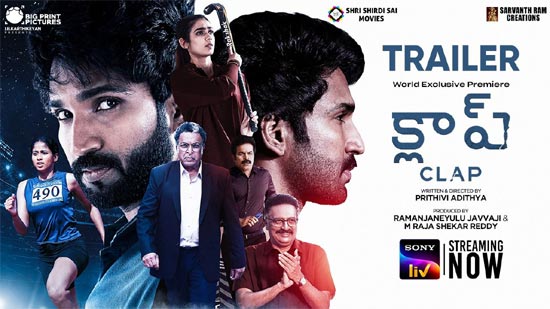 A few weeks ago, Sony LIV has announced that Aadhi Pinisetty’s upcoming movie, Clap, will be premiered on its platform. Today, the OTT platform has released the theatrical trailer of the movie.

The intense trailer promises an emotional sports drama. The video showcased Aadhi as an amputee athlete. The national champion gets to know about a young woman athlete who is from a small village. He asks several coaches to train her but ends up in vain. Later, he decides to train her on his own. What happens next? Does she become a national champion? This needs to be known by watching the main movie.

Besides, Sony LIV has confirmed that the movie will be premiered on March 11, 2022. Akanksha Singh, Krishna Kurup, Prakash Raj, Nassar, Brahmaji and others in this movie, directed by Prithivi Adithya. Maestro Ilaiyaraaja has composed the music for this sports drama.