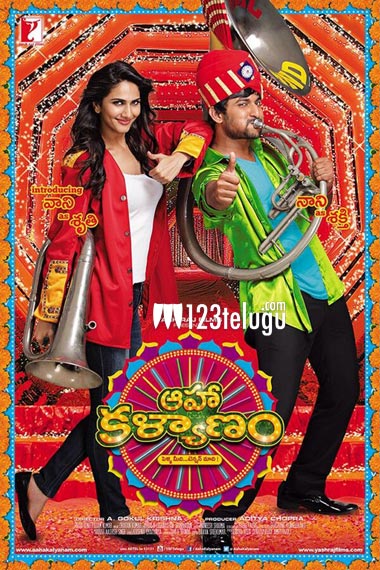 Hero Nani is a part of the first south Indian foray of Yash Raj Films. The movie is ‘Aaha Kalyanam’ and it is getting ready for a big release in Telugu and Tamil this 21st. Promotional activities of the film are in full swing. The team has been going around a number of radio stations in the city of Hyderabad, to talk to listeners and create a buzz. The team visited the Big FM radio station today.

Nani is promoting this movie quite aggressively and he has been interacting with a number of media personnel since the last few days. ‘Aaha Kalyanam’ is an official remake of the Bollywood super hit ‘Band Baaja Baaraat’. Vani Kapoor is the heroine in this movie and A. Gokul Krishna has directed the film. Dharan Kumar composed the music.

‘Aaha Kalyanam’ is expected to be a romantic comedy with a good dose of commercial elements. The film has been tweaked slightly to suit the tastes of Telugu and Tamil viewers.