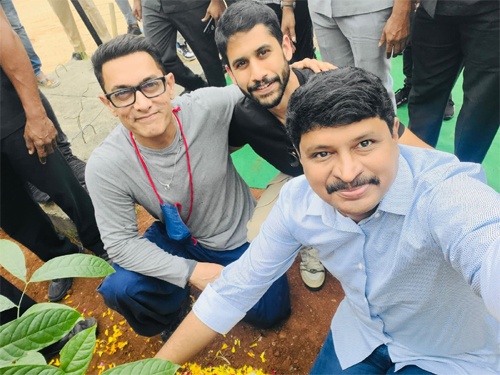 Bollywood superstar Aamir Khan and Tollywood star Naga Chaitanya took part in the Green India Challenge on Sunday morning in Hyderabad. Telangana MP Santhosh Kumar, who initiated this mega plantation drive, was also present while Aamir and Chay planted saplings. Highlighting the importance of the Green India Challenge, Aamir said the GIC has become quite crucial in improving the greenery across the country.

Aamir flew down to Hyderabad earlier today to take part in Love Story Unplugged pre-release event which will be held from 5 PM this evening. Aamir and Chay bonded well during Laal Singh Chaddha’s Ladakh and Kashmir schedules. Chay will be making his big Bollywood debut with LSC.

On the other hand, Love Story is gearing up for its theatrical release on September 24. The film has Sai Pallavi playing the female lead and Sekhar Kammula as the director. Narayan Das Narang and P Ram Mohan Roy produced the movie.

Welcome to the Sublime family of #GreenIndiaChallenge #AmirKhan ji. An honour for us to accompany him & @chay_akkineni garu as they have planted a sapling as part of our #GIC initiative. It is certain that your participation would immensely boost up others to replicate your work. pic.twitter.com/vcDSL1nIdW