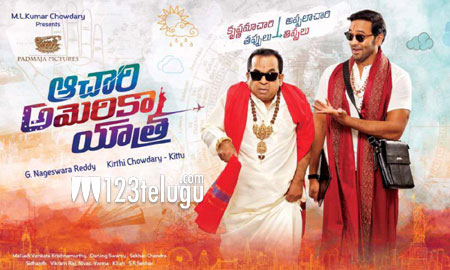 The unit of Vishnu Manchu’s Achari America Yatra is currently shooting the film’s final song in the US. The song shoot will be over by the year end, while the post-production work is underway simultaneously.

Vishnu announced recently that they are aiming to release the film on January 26, to coincide with the Republic Day holiday. Incidentally, Anushka’s Bhaagamathie, Manjula’s Manasuku Nachindi, Kamal Haasan’s Viswaroopam 2 are slated to hit the screens on January 26.

G Nageswara Reddy is directing Achari America and. The film was shot extensively in the US, Dublin and Malaysia, apart from India. The film also stars Pragya Jaiswal and Brahmanandam in prominent roles. Senior producer ML Kumar Chowdary is presenting the movie and Thaman is composing the music.