Acting in Thalaivi was a fantastic experience: Arvind Swami
Published on Sep 6, 2021 12:00 am IST 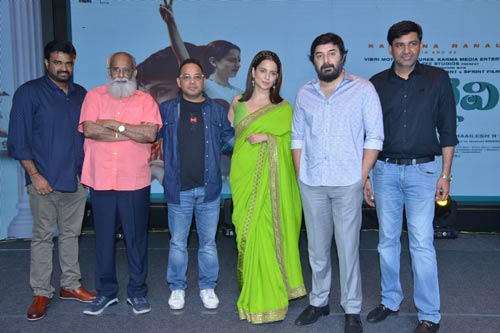 Thalaivi, a Tamil-Hindi biopic on legendary yesteryear actress and former Tamil Nadu CM J Jayalalithaa, is gearing up for its theatrical release on September 10. Bollywood actress Kangana Ranaut played the titular role in this period drama. The film’s core team landed in Hyderabad for the Telugu version’s pre-release event this evening.

Speaking at the event, actor Arvind Swami, who portrayed Jayaa’s co-star and political guru MGR, described acting in Thalaivi as a “fantastic experience”. Arvind said Kangana Ranaut has pulled off the film on her shoulders and that he learnt a lot from Kangana and others during the making of Thalaivi. Arvind concluded saying that he watched Thalaivi’s final copy a couple of days ago and he is confident that the film will become a big hit at the box-office.