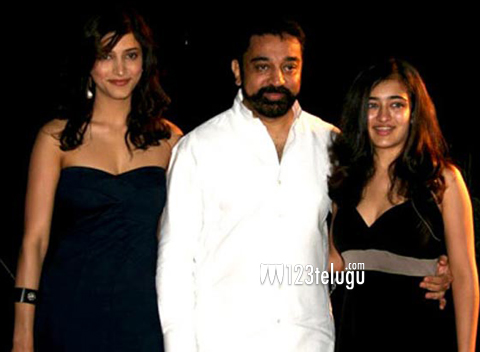 In his career spanning close to five decades, Kamal Haasan has been part of several iconic films and he has dedicated his entire life to cinema. It goes without saying that his contribution to cinema has been immense. Now, both his daughters, Shruti Haasan and Akshara Haasan, are following his footsteps and continuing his legacy.

Talking about his daughters, Kamal Haasan has an interesting story to tell. “I’ve never taught my daughters how to act because I believe acting is in their genes. Except for sharing acting tips on some rare occasions, I’ve given them complete freedom to make their own decisions when it comes to films. I trust their judgement and ultimately, it’s their life. Only they know what’s best for them,” he told the media recently in Chennai.

Meanwhile, he’s busy with the post-production of his upcoming film Vishwaroopam 2. The film is expected to hit the screens early next year in Telugu, Tamil and Hindi and all the three versions have been mixed in Auro 11.1 Sound. “I’m confident that this film won’t face the same trouble and issues which the first part faced,” he said. He has written, co-produced and directed the film, apart from playing the lead role.