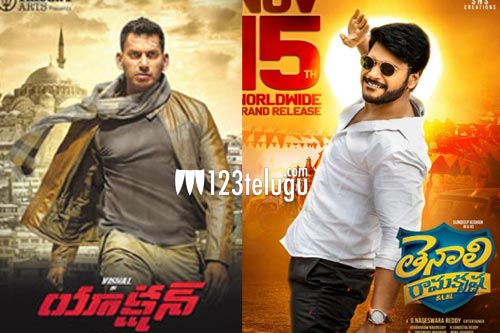 After Khaidi and Whistle a couple of weeks ago, yet another Tamil film, Action, dubbed in Telugu with the same title and is testing its luck by releasing today. The film has Vishal and Tamannaah in lead roles and it received average reviews.

On the other hand, Tenali Ramakrishna BA BL, featuring Sundeep Kishan and Hansika in lead roles, also opened today and got mixed reviews. The film’s box-office numbers are not as desired. In fact, Action’s collections are somewhat better than Tenali Ramakrishna in most areas in the twin Telugu states.

With Vijay Sethupathi’s new Tamil film, Sangha Tamizhan (Vijay Sethupathi in Telugu), is being released tomorrow, the clash between the three movies will be something to watch out for. Stay tuned for further updates on the box-office collections.