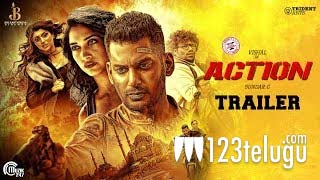 After the grand reception for the Tamil trailer, the makers of Vishal and Tamannaah’s upcoming action thriller, Action, unveiled the Telugu trailer. Director Puri Jagannadh launched the trailer this evening.

Action’s trailer is loaded with top-notch action and stunts shot in some breathtaking locales in Turkey, Azerbaijan, Baku, Krabi Island and London. The film showcases an international conflict and Vishal plays a Commando in the movie. Along with Vishal, Tamannaah too performs some high-octane stunts.