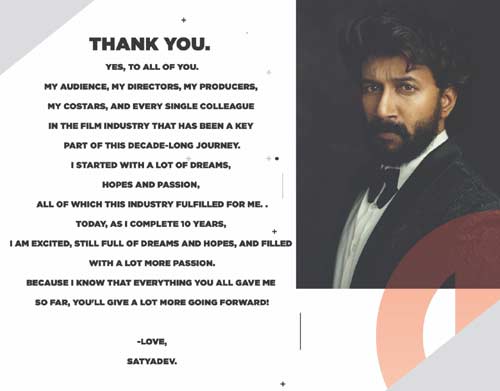 Talented actor Satyadev has competed 10 years as an actor in the Telugu film industry. The actor took to social media and penned a heartfelt note, thanking his audience, directors, producers, co-stars and each and every colleague who has been a key part of his decade-long journey in films.

“I started with a lot of dreams, hopes and passion, all of which this industry fulfilled for me. Today, as I complete 10 years, I’m excited, still full of dreams and hopes, and filled with a lot more passion. Because, I know that everything you all gave me so far, you will give a lot more going forward,” he tweeted.

Satyadev made his acting debut with Mr. Perfect in 2011, in which he played Prabhas’ friend. He went on to play key roles in movies such as Jyothi Lakshmi, Mana Oori Ramayanam, Appatlo Okadundevadu, The Ghazi Attack, Antariksham, Sarileru Neekevvaru and Uma Maheswara Ugra Roopasya.