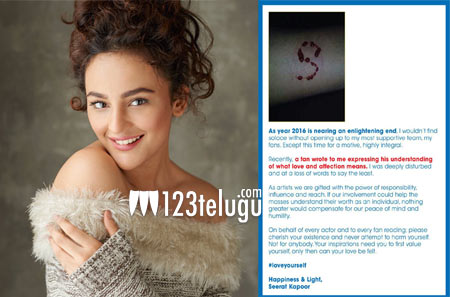 Film stars are madly loved by their ardent fans who go to any length to display their fanaticism. In one such incident, a die-hard fan of young starlet Seerat Kapoor of Run Raja Run fame etched the actress’ initial on his hand with a knife and even posted the picture of his bleeding hand to Seerat.

Deeply disturbed by her fan’s madness, Seerat took to Twitter and appealed to her followers to first understand their worth and value their existence before showing their admiration for their favorite stars.

Seerat’s earnest appeal found support from her peers in the film industry as well as her fans.