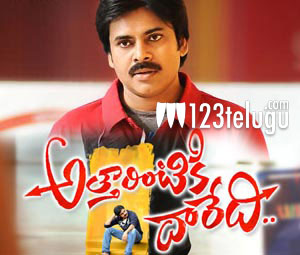 Power Star Pawan Kalyan’s ‘Atharintiki Dharedhi’ has been one of the most eagerly awaited films of this season. Ever since the first trailer came out, fans and movie lovers have been quite keen about this movie. Now, after the shock upset where about 90 minutes of footage has leaked out onto the internet, a massive wave of public support for the producer and the production team is adding to the effect.

These two factors together will ensure that the film takes in phenomenal openings this Friday. Ticket sales have been extremely brisk and a popular ticket booking site went down for some time yesterday, due to the sheer number of ticket buyers.

Samantha will be seen as Sashi in this movie and her romantic track with Pawan Kalyan is said to be quite cute. Trivikram Srinivas is the director of this movie and Devi Sri Prasad has composed the music. BVSN Prasad has produced this movie.