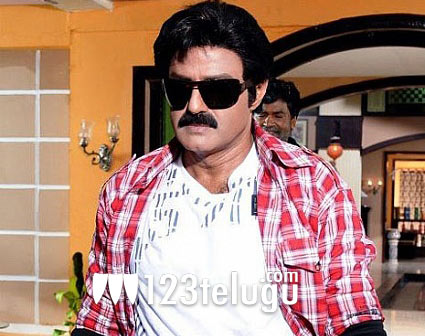 Nata Simham Balakrishna is on a high with the magnificent success of Sri Rama Rajyam. His upcoming entertainer ‘Adhinayakudu’ is nearing completion and the producer M.L.Kumar Chowdhary says that the movie is on track for a Sankranthi 2012 release. The film has Balakrishna playing three different roles. Saloni and Lakshmi Rai are the main heroines.Shooting of the movie is almost complete and a song will be canned in Hyderabad on Balakrishna and Lakshi Rai from the 26th of this month

‘Adhinayakudu’ is being directed by Paruchuri Murali. Kalyani Malik has scored the music for this film. The director says that Balayya’s role as an old man is going to be the highlight of the movie. Sankranthi has traditionally been a good time for Balakrishna, so fans are expecting a nice blockbuster.