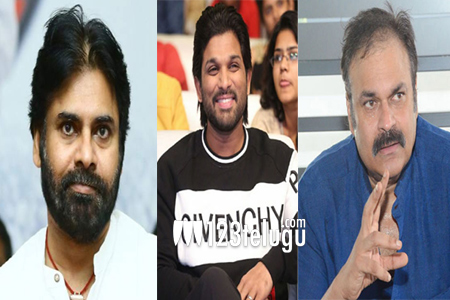 On Saturday night, Ram Charan flew down to Mangalagiri and met his uncle Pawan Kalyan who was down with dehydration after an intense round of election campaign. Charan also wished his another uncle Nagababu and even took part in Janasena’s election campaign.

Now, Allu Arjun is all set to fly to his native place Palakollu to meet Pawan Kalyan. The Stylish Star will be meeting with the Janasena chief tomorrow to enquire about his health and also to personally extend his support to Pawan and Janasena party.

After meeting Pawan, Bunny will travel to Narasapuram to meet his uncle Nagababu and extend his support. Needless to say, both Ram Charan and Allu Arjun’s timely support has brought a huge cheer to the Janasena cadres.