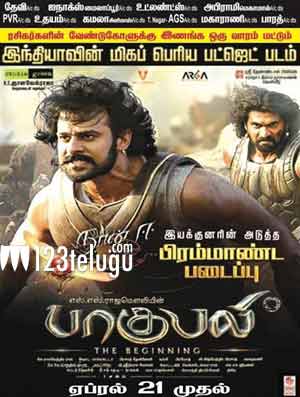 In the view of the grand worldwide release of Baahubali The Conclusion, hotshot Bollywood filmmaker Karan Johar re-released the film’s first part, The Beginning, in a record number of 1,000 plus screens last week.

Following the same strategy, the film’s first part’s Tamil version is gearing up for its release on April 21 in several theaters across Chennai and Tamil Nadu. No doubt in saying that this re-release will give yet another​ opportunity to all the film lovers who missed this magnum opus’ theatrical release a couple of years ago.

Meanwhile, Baahubali The Conclusion has completed all the post-production formalities and is all set for the big day, which is April 28.