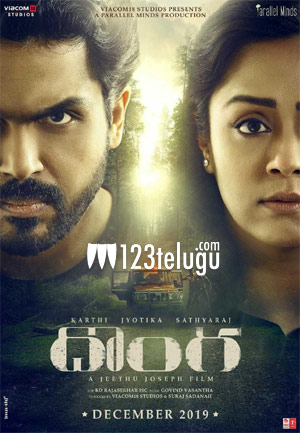 Hero Karthi has scored a much-needed blockbuster with Khaidi. With this film, Karthi has entered the Rs 100 crore club for the first time in his career. Khaidi’s title was unknowingly inspired from Megastar Chiranjeevi’s 80s blockbuster with the same title.

Now, even Karthi’s upcoming film has been titled after an old Chiranjeevi mass hit, Donga. Donga, titled Thambi in Tamil, also has Karthi’s sister-in-law Jyothika. The teaser for Donga and Thambi will be unveiled tomorrow (Nov 16) at 11 am.

Donga is touted as a crime comedy thriller. The film is said to be releasing on December 20. Drishyam director Jeethu Joseph has directed Donga.