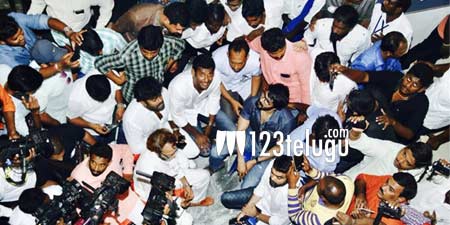 Tamil star Vishal received a huge jolt when the Tamil Nadu State Election Commission rejected his nomination for the RK Nagar by-election earlier today. The EC has said that 2 out of the 10 proposers who supported Vishal’s nomination have alleged that their signatures were forged.

Vishal then staged a huge dharna and said that he has video evidence to prove that the two proposers were threatened to withdraw their support. In the end, after much drama, the EC has accepted Vishal’s nomination and the actor is all set to contest the RK Nagar by-election as an independent candidate.

A thrilled Vishal took to Twitter and said that democracy has prevailed and truth has triumphed, announcing that the EC has accepted his nomination.

After much struggle, my nomination for the RK Nagar election is finally accepted….

In Truth, I Trust & In Youngsters, I Believe….God Bless !! pic.twitter.com/KJ7JPIsOyN