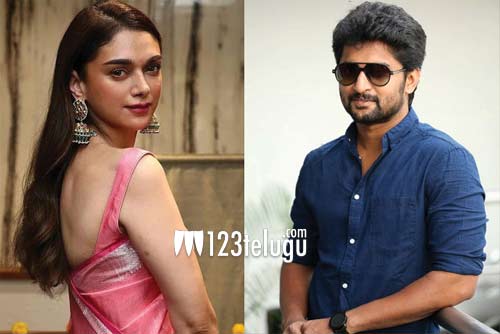 Hero Nani’s long-delayed silver jubilee film, V, will finally have its digital premiere on Amazon Prime on September 5. An official announcement regarding this news will be made today. Nani has already begun shooting for his 26th film, Tuck Jagadish.

And for his 27th film, Nani had locked Taxiwaala fame Rahul Sankrityan. Titled Shyam Singha Roy, this period thriller will commence towards the end of the year or early next year. Already, the makers had roped in Nani’s MCA co-star Sai Pallavi as one of the female leads.

And the latest buzz is that Nani’s co-star in V, Bollywood actress Aditi Rao Hydari, is under consideration for the other leading lady’s role in Shyam Singha Roy. An official announcement is awaited from Sithara Entertainments banner regarding this buzz.