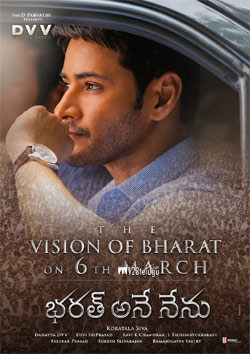 The ‘first oath’ audio teaser of Superstar Mahesh Babu’s highly-anticipated political thriller in Koratala Siva’s direction, Bharath Ane Nenu, created ripples on the internet. Now, BAN’s makers are all set to unveil the film’s ‘Vision of Bharath’ on March 6. We assume it’s going to be a video teaser.

Needless to say, this unique promotional strategy is generating a huge amount of curiosity among fans. The film is in the last leg of its shooting and the entire production formalities will be wrapped up by March end.

In Bharath Ane Nenu, Mahesh Babu will be seen as the Chief Minister of erstwhile Andhra Pradesh. Bollywood starlet Kiara Advani is the leading lady in this most eagerly awaited film. DVV Danayya is bankrolling this movie with a lavish budget. Devi Sri Prasad is composing the soundtrack for BAN. The film releases on April 20.