After US, Aravindha Sametha storms box-offices in Telugu states
Published on Oct 11, 2018 12:38 am IST 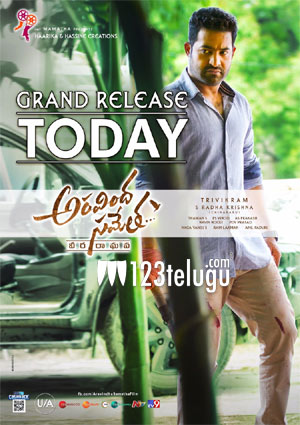 The stage is all set for the grand release of NTR and Trivikram’s Aravindha Sametha. The film is hitting theaters worldwide in a couple of hours amid sky-high expectations. The fact that both NTR and Trivikram have joined hands for the first time has added to the buzz.

Aravindha Sametha is poised to take a humongous opening at the box-offices in Andhra Pradesh and Telangana including Hyderabad. Tickets for the early morning special shows and the regular four shows are nearly 90 percent full already. A 100 percent opening is pretty much on the cards. Trade circles are predicting that Aravindha Sametha may collect nearly 25 crore worldwide share on its day one.

On the other hand, Aravindha Sametha is going to have a solid premiere day in the US. The film has already grossed close to $500K and is heading towards the $1 million opening. Stay tuned for more updates.