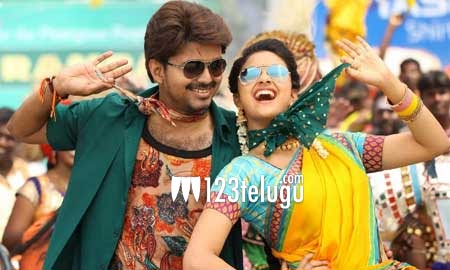 With each passing day, the popularity of Tamil star Vijay has grown by leaps and bounds. This is clearly shown as his new release, Agent Bhairava will release in close to 150 screens in both the Telugu states.

This is quite a good release for Vijay keeping his reach here in mind. Nenu Shailaja fame Keerthi Suresh is the female lead and the film has been directed by Bharatan.

Kabali fame Santosh Narayanan composes the music for this film which is a complete village drama. We need to see what kind of magic can the film which was average in Tamil recreate here.