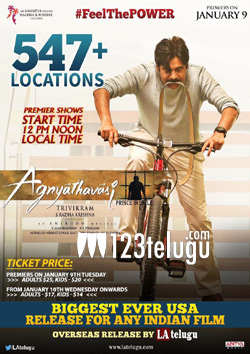 Power Star Pawan Kalyan’s highly-anticipated landmark 25th movie, Agnyaathavaasi, is gearing up to hit the screens on January 10 as a Sankranthi festive treat. Expectations on the Pawan-Trivikram combo are sky-high, as the duo is reuniting after the 2013 industry hit, Atharintiki Dharedi.

Now, weeks before its release, Agnyaathavaasi has set an all-time record for any Indian film released in America till date. Agnyaathavaasi’s overseas distributors at LA Telugu are giving the film a humongous release in a whopping 547 screens across the US. The ticket rates are priced at $25 (adults) and $20 (kids) for the January 9 premieres. From January 10 onwards, the ticket rates will be $17 (adults) and $14 (kids) respectively.

S Radhakrishna is the film’s producer and Keerthy Suresh and Anu Emmanuel are the leading ladies. Anirudh Ravichander is the film’s music composer.