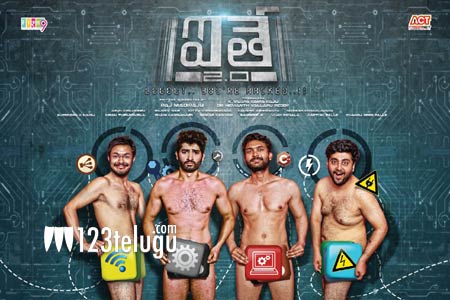 Released in 2003, Chandrasekhar Yeleti’s Aithe was hailed as a path-breaking film in Telugu Cinema. Now, after almost 15 years, a film, titled Aithe 2.0, is gearing up for release. Aithe 2.0 is not a sequel to Aithe and unlike its predecessor, the film is touted to be a techno thriller.

This morning, the makers of Aithe 2.0 unveiled an impressive motion poster. The film is slated for release this summer and the exact date of release will be announced soon. Aithe 2.0 is directed by Raj Madiraju and it stars Indraneil Sengupta, Abhishek, Kartavya Sharma and Neeraj as the main leads. Zara Shah of Shekar Kammula’s Life Is Beautiful fame is the film’s leading lady.

Aithe 2.0 is being produced by K Vijaya Rama Raju and Dr. Hemanth Vallapu Reddy. Arun Chiluveru has composed the music.