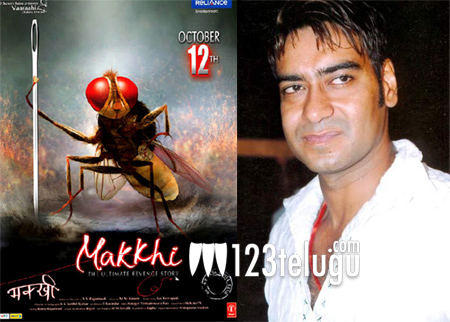 S S Rajamouli’s blockbuster film Eega is now being dubbed in Hindi. Already, the film’s post production work has been wrapped up and Rajamouli has decided to release the film across North India on October 12. Among the film’s cast and crew, only Sudeep is a noted face in Bollywood since he had already appeared in films like Rann and Phoonk. Samantha had appeared in a cameo in Ekk Deewana Tha; however, the film failed to make an impact. Now, a leading Bollywood actor has come forward to lend his voice for the film. “Ajay devgan watched makkhi last night.he was very impressed.He agreed 2giv the voice over 4 the father in the opening credits Thank you Sir,” S S Rajamouli posted on Twitter. In the Telugu version, S S Rajamouli had lend his voice for this sequence where he tells his daughter the fairy tale about a fly. Nani, Sudeep and Samantha had played the lead roles. M M Keeravani had composed the music.