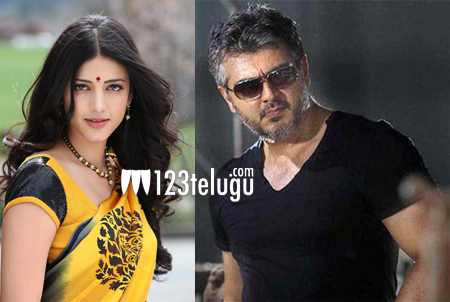 The much awaited Thala Ajith’s 56th film is nearing its completion. The film’s unit, along with the main leads Ajith and Shruti Haasan, will take part in the final schedule in Kolkata till its completion. This yet to be titled film is being directed by Siva of Gopichand’s Souryam fame and produced by senior filmmaker AM Ratnam.

Recently, the unit canned a high octane action episode involving Ajith and the film’s villain, Kabir Duhan Singh, who was all praises for the Tamil star’s simplicity. Young musical sensation Anirudh Ravichander, who will soon be composing tunes for Trivikram-Nithiin film, is the film’s music composer.