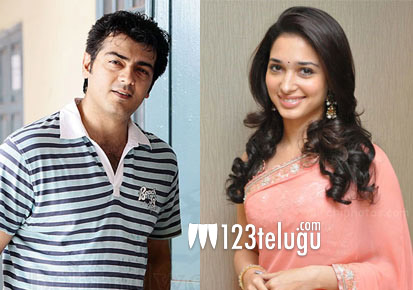 Ajith and Tamannaah are going to team up for the first time for an untitled Tamil film. Shouryam Siva is going to direct the film and the principal shooting of the film began earlier today in Ramoji Film City. Ajith has already begun shooting for the film and Tamannaah is expected to join the team soon. Vijaya Productions banner is producing this film. The first schedule of the film will be shot in Hyderabad till April 20. Devi Sri Prasad is scoring the music for this family entertainer. One of Ajith’s earlier films Gambler, the Telugu version of Mankatha, did well in Andhra Pradesh; however, his last film Billa-2 was a big flop. Apart from this untitled film, he’ll soon be seen as a hacker in Vishnuvardhan’s upcoming film which also stars Nayanthara, Taapsee and Arya.