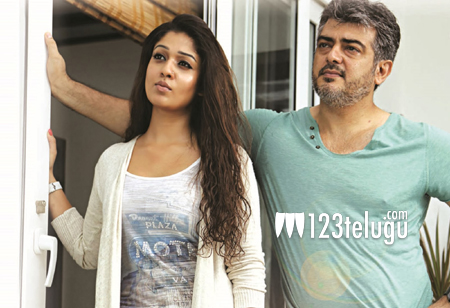 Ajith and Nayanthara will soon be seen in a film titled Aata Arrambham, which is the Telugu dubbed version of their recent smash hit Tamil film, Arrambham. Vishnu Vardham (of Panjaa fame) has directed the film and it also stars Taapsee and Arya in lead roles. G Sreenu Babu has bought the dubbing rights for the Telugu version.

The latest news is that the audio of this film is going to be launched in Shilpakala Vedika, Hyderabad on November 24. Several dignitaries are expected to grace the event and the makers are planning to organize the event in a grand way.

Ajith will be seen in a stylish new avatar and Nayanthara’s glamour quotient has already received high praise from Tamil film audience. Rana Daggubati has played a cameo in the film. Yuvan Shankar Raja has scored the music and the film will hit the screens on December 6.