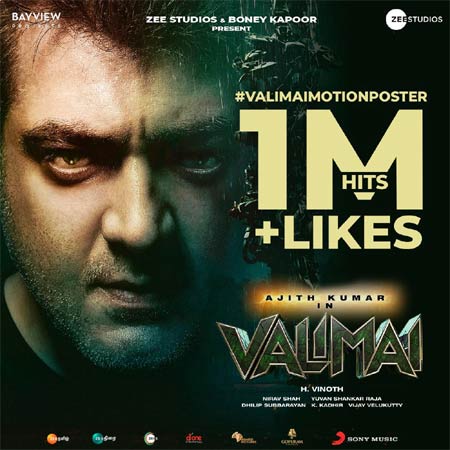 Yesterday, much to the joy of millions of fans, the makers of Kollywood star Thala Ajith’s upcoming action thriller, Valimai, unveiled a stylish and impactful motion poster. Ajith looked stylish as ever in the poster and Yuvan Shankar Raja’s terrific background score elevated Ajith’s heroism to the next level.

Needless to say, fans are having a gala time witnessing Ajith back in action after more than 2 years. Now, in a sensational feat, Valimai’s motion poster has clocked a whopping 1 million plus likes and became the most liked Indian motion poster on YouTube. The motion poster was released on three YouTube channels – Sony Music South, Zee Studios and Bayview Projects.

Fans are celebrating this massive feat by trending the hashtag #MostLikedIndianMPValimai. This goes on to prove the huge craze surrounding Valimai. Bollywood actress Huma Qureshi is the leading lady and Tollywood hero Kartikeya is the main antagonist in this H Vinoth directorial. Boney Kapoor is bankrolling the project in association with Zee Studios.