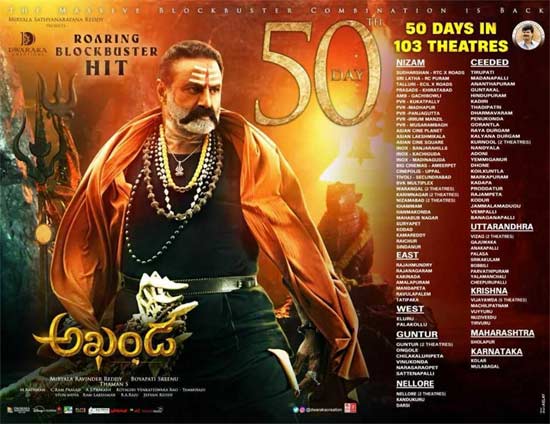 The duo, Nandamuri Balakrishna and Boyapati Srinu, is said to be one of the craziest and most successful combinations. After delivering two blockbusters they have again delivered another sensational hit movie Akhanda, which is the highest grosser in Balayya’s career.

Today, the movie has successfully completed 50 days in 103 centers which is a rare feat in recent times, not only in Tollywood but the entire Indian film industry.

The film has made a massive Rs. 200 crores gross. It is a profitable venture overseas too. While it has done wonderful business in the UK and Australia, the film crossed the 1 million dollar mark in the USA.

Despite new releases every week, the movie continued its rage at the box office to make solid business. The background score by Thaman S is one of the biggest assets of Akhanda and Ram Prasad’s cinematography is an added advantage.

Pragya Jaiswal played the leading lady in the movie, while Srikanth played the antagonist and Jagapathi Babu appeared in an important role.