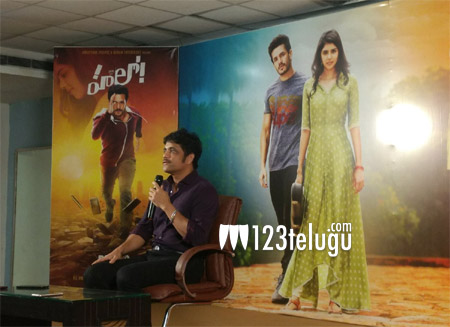 123telugu had already reported that the highly-anticipated audio album of Akhil Akkineni’s upcoming romantic action entertainer, Hello, will be unveiled in a grand event in Vizag on December 10. The event will take place at the MGM Grounds, Vizag from 6 pm.

Announcing this news in a press meet this evening, the film’s producer and Akhil’s father Nagarjuna has revealed that Akhil is going to sing a song and also perform a dance number during the audio launch event. One can expect the young Akkineni lad to croon the Evevo Kalalu Kanna song from the album, which he sang in Anup Rubens’ composition. Akhil is currently practicing hard for his song and dance performances.

Hello is slated for a grand release on December 22. Debutant Kalyani Priyadarshan is the film’s female lead. Annapurna Studios and Manam Enterprises banners have produced the movie, while Vikram Kumar has directed the movie.