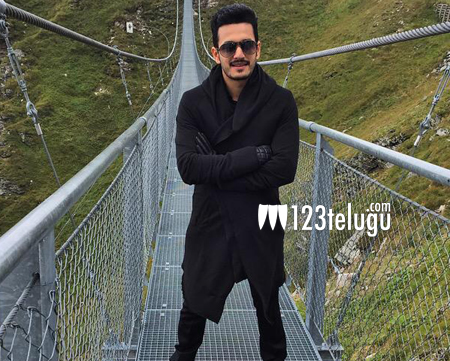 One of the most awaited films of the upcoming festive season, Akhil Akkineni’s debut film Akhil, is fast finishing its final schedule in Hyderabad. The film, directed by VV Vinayak and produced by actor Nithiin, has been the talk of the town ever since its commencement. For the last few days, Akhil has been visiting several colleges in Hyderabad to promote the film.

Now, the unit members of Akhil will be touring in three major cities in the USA to promote the film. In Akhil’s words, this will be the first time that a Telugu film unit will promote its film in such a grand way in overseas. The film’s unit is currently in the US to take part in several promotional events in New Jersey, Dallas and San Francisco Bay Area.

The film’s audio and the grand theatrical trailer raised the expectation levels among fans, and huge openings are expected when the film releases on 22nd October.