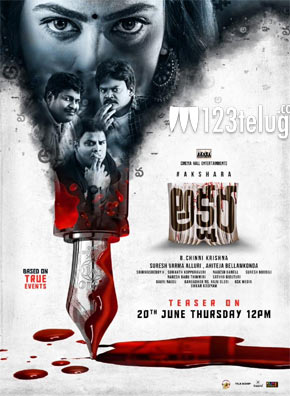 Akshara is one film which has been promoted on a good note right from the day of its launch. Finally, the teaser of the film has been launched today.

The teaser opens with the voice over of Ajay Ghosh who is showcased in a carefree manner along with his friends played by Shakalaka Shankar, Madhu, and Satya. Their happy lives turn out miserable with the entry of Akshara played by Nanditha Swetha.

All this has been established well in the teaser and proceedings look fun. A decent suspense factor is also generated when the friends plan to murder Akshara.

The film is directed by Chinni Krishna and he has done a good job to make the teaser look interesting as of now.

With a good amount of thrill and comedy touch to it, the teaser looks fun. Ahiteja Bellamkonda and Suresh Varma jointly produce this film.