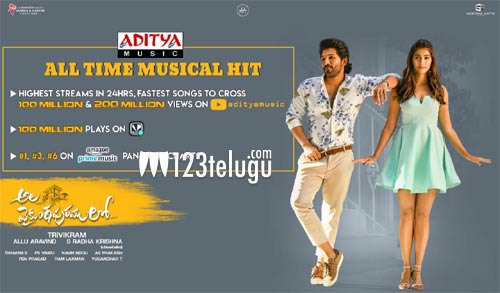 The numerous records broken by Ala Vaikunthapurramuloo’s audio album need no introduction. Samajavaragamana, Ramuloo Ramulaa and Butta Bomma songs from this Allu Arjun and Pooja Hegde-starrer are topping the chats until now.

Now, the above three songs, composed by Thaman, have pulled off a unique feat on Amazon Music. Samajavaragamana (1st place), Ramuloo Ramulaa (3rd place) and Butta Bomma (3rd place) have entered the list of top 10 hits on Amazon Music. Thus, Ala Vaikunthapurramuloo became the first film ever to have 3 of its songs in Amazon Music top 10 list.

Already, Ala Vaikunthapurramuloo became the first South Indian album to cross 100 million plays on Jio Saavn app. The film’s audio has also been a massive hit on other popular music streaming apps such as Wynk, Spotify and Gaana.