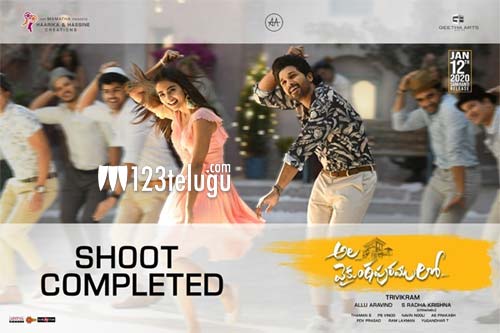 Finally, the makers of Allu Arjun and Trivikram’s Sankranthi family entertainer, Ala Vaikuntapurramuloo, have wrapped up the film’s shooting formalities. The team announced the same by releasing a special poster featuring Bunny and Pooja Hegde grooving to a dance number.

Ala Vaikuntapurramuloo is slated to hit theaters on January 12. The film’s audio album, composed by Thaman, has turned out to be a massive chartbuster and raised the expectations on the movie. The film also stars Tabu, Nivetha Pethuraj, Navdeep and Sushanth in key roles.

S Radhakrishna is producing the film under Allu Aravind’s presentation. The film’s pre-release event will be held in January first week. Stay tuned for more updates on this highly-anticipated biggie.
Attachments area