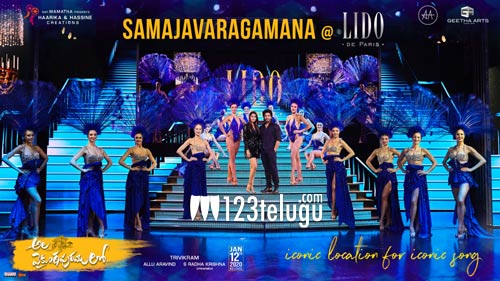 Samajavaragamana, the most popular song of the season, from Ala Vaikunthapuramulo is back in news yet again. The song, which went viral on the internet, is currently being shot in various locales in France, including Paris and Le Mont-Saint-Michel near Normandy.

The latest news is that Samajavaragama is going to be first South Indian film that has been shot in Lido De Paris, an iconic spot which has been drawing audience for more than 70 years. Le Lido is a cabaret and burlesque show located on the Champs-Élysées in Paris, and is popular for its shows featuring singers, dancers, and it’s the first time that they have opened their door for a South Indian film shoot.

“Your love for the song made us come to France to shoot it at such an iconic place like Lido De Paris. We cherish the memory and hope that you’ll enjoy watching the song on screen too,” the team said. Directed by Trivikram Sreenivas, the film stars Allu Arjun, Pooja Hegde, Tabu, Sushanth and several other top actors. Thaman has scored the music.