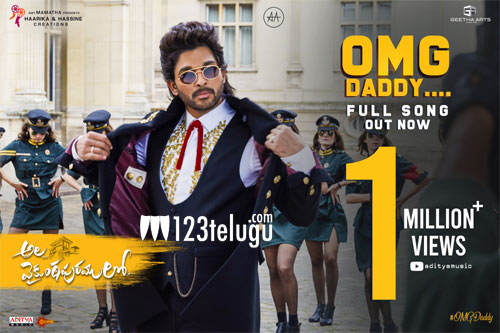 After the two chartbuster songs, ‘Samajavaragamana’ and ‘Ramuloo Ramulaa’, the third single from Allu Arjun and Trivikram’s Ala Vaikunthapuramulo, ‘OMG Daddy’ was launched this evening. Music composer Thaman has done it yet again and delivered a peppy number.

What’s special about OMG Daddy is that it has been dedicated to the legendary yesteryear comedian Padma Shri Allu Ramalingaiah, who happens to be the film’s co-producer Allu Aravind’s father and Allu Arjun’s grandfather. OMG Daddy song has some fun lyrics, as the film’s protagonist makes some cheeky complaints on his father, played by Murli Sharma.