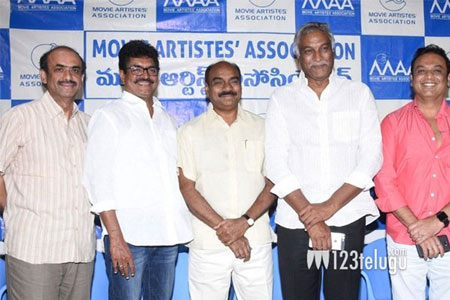 A few days ago, the entire Telugu film industry was rocked by the sensational allegations of corruption in the Movie Artiste’s Association (MAA). Senior hero and MAA’s General Secretary Naresh alleged that MAA President Shivaji Raja and Vice President Srikanth resorted to high level corruption to the tune of several crores. There was a war of words between Naresh and the Shivaji Raja-Srikanth faction.

Meanwhile, senior personalities in the industry like Suresh Babu, Thammareddy Bharadwaja, Gemini Kiran and others intervened and sorted out the differences between the warring actors. Today, a press meet was called where it was announced that a Collective Committee had internally probed the matter and gave a clean chit to Shivaji Raja and Srikanth.

Both Naresh and Shivaji Raja announced that all is well between them and that they will work together in future.