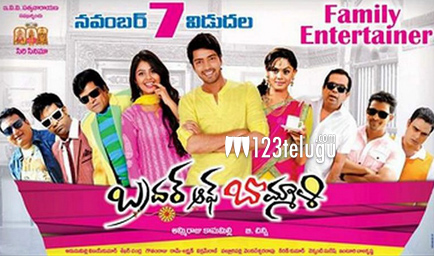 Comedy King Allari Naresh’s latest offering ‘Brother of Bommali’ is all set to release on November 7th. The trailers and music have caught on quite well, and sources reveal that Allari Naresh and his team have watched the final copy and are super confident about their film.

As this film is a laugh riot, Allari Naresh has taken special care for his role and has made sure that he does not disappoint the audience this time around. Karthika plays his twin sister and will be an added attraction as well. Directed by ‘Veedu Theda’ fame B. Chinni, this film features Monal Gajjar as the female lead while Karthika plays the crucial role of Naresh’s twin sister.