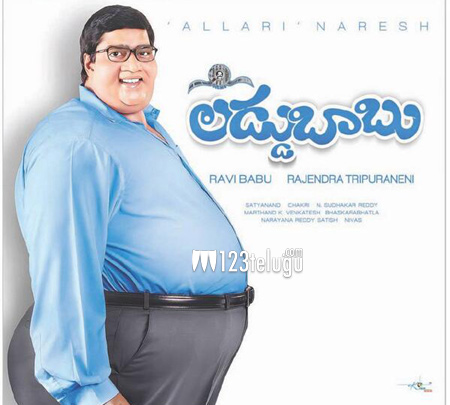 The first look of Allari Naresh’s upcoming film Laddu Babu was unveiled earlier today and the actor has surprised everyone with his transformation. He’s playing the role of an obese person in this film and his look in the film is so good that he was almost unrecognizable. Allari Naresh had to wear prosthetic make-up, which was designed by make-up artists from UK, for his role. Ravi Babu has directed the film and Rajendra Tripuraneni is the producer.

Several celebrities from Telugu film industry expressed their surprise on Twitter about Laddu Babu’s first look and almost all of them noted that it’s quite a stunning makeover. Not many details about the film have been revealed so far and Ravi Babu, like most of his other films, doesn’t seem to be in the mood to reveal anything until the film is ready for release.

Chakri has scored the music for Laddu Babu and N Sudhakar Reddy is the cinematographer. More details about the cast are expected to be revealed soon.