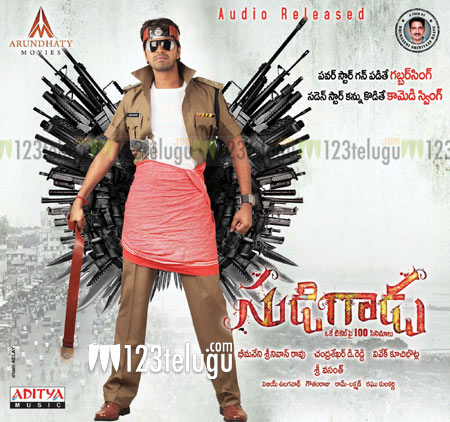 Comedy King Allari Naresh’s ‘Sudigaadu’ is all set for a release next month and the movie is a spoof on various blockbuster Telugu films. In keeping with the movie’s theme, Allari Naresh and team have decided to pull off a spoof on the tradition of audio functions in the Industry. The team will be holding the ‘Hexa Platinum Disc Function’ of ‘Sudigaadu’ today evening in Hyderabad! Didn’t get it? The Hexa Platinum Disc function is being held even before the audio release!

Basically, the Hexa Platinum function is held to celebrate the success of an audio album in the market and by holding the success function even before the film’s audio has released, Allari Naresh and team have managed to bring a few smiles. The audio of the movie will be launched tonight at this function. ‘Sudigaadu’ has been directed by Bheemaneni Srinivasa Rao.