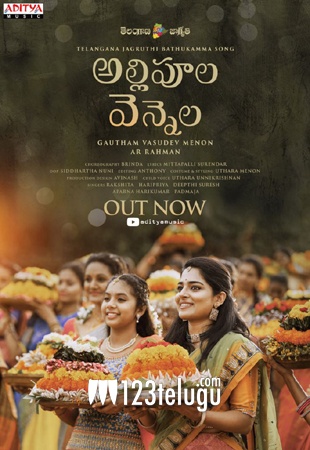 Oscar-winning composer AR Rahman and popular Kollywood director Gautham Menon teamed up with MLC and Telangana Jagruthi chief Kalvakuntla Kavitha and came up with a beautiful Bathukamma song titled ‘Allipoola Vennela’. The song has been launched this evening to ring in the Bathukamma festivities.

Unlike the usual folk touch for Bathukamma songs, Rahman and Gautham Menon gave a melodious classical twist to Allipoola Vennela song. Kavitha also made a special appearance in the song that celebrates Telangana culture and togetherness and bonding among the womenfolk.

Sung by Uthara Unnikrishnan, Allipoola Vennela has been penned by lyricist Mittapalli Surender, and choreographed by National Award winner Brinda. The song is loaded with vibrant colors and it has been shot in rural locales in Bhoodan Pochampally.