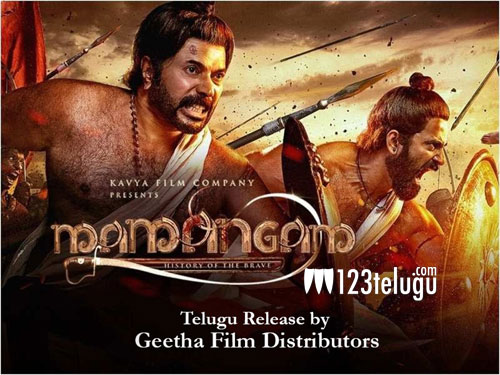 Malayalam stalwart Mammootty’s upcoming period war epic, Mamangam, is one of the most eagerly awaited films this season. The film is simultaneously releasing in Malayalam, Tamil, Telugu and Hindi, which is a record by any Malayalam movie. The film hits screens on November 21.

As per the latest updates, veteran Tollywood producer Allu Aravind’s distribution house Geetha Films has acquired Mamangam’s theatrical rights and will release the film across Andhra Pradesh and Telangana. Mamangam’s teaser was released sometime back to a positive response.

Mamangam is directed by Padmakumar and produced by Venu Kunnappilly. The film’s story is set in the 17th century and it showcases the fierce battles fought by a few warriors, including Mamangam, against their rulers.