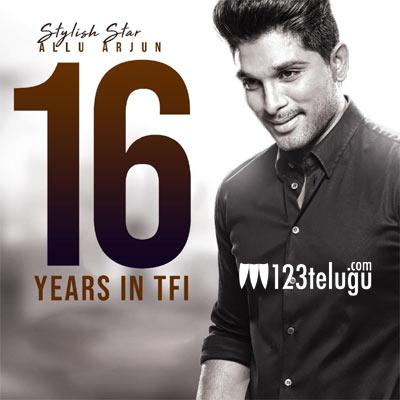 It has been sixteen years since Allu Arjun made his entry into Tollywood with Gangotri. The film did not make him a star overnight but it was with Arya that Bunny proved himself as an actor and performer.

Since then, there has been no looking back for Allu Arjun as he has given several back to back hits in these sixteen years. He played a lover boy and did youthful films before making a transition into a mass hero with the film Sarrainodu.

When Allu Arjun was being labeled as a star who can only dance and look good, he silenced his critics with his performances in films like Race Gurram, Rudramedevi, and Son of Satyamurthy.

With years of experience and love for his fans, Bunny is the biggest star on social media and is loved by fans in the northern part of the country as well.

After a gap of one year, he is going to work with Trivikram once again and Bunny says that the best is yet to come. Well, we wish Bunny the best of luck for his future.