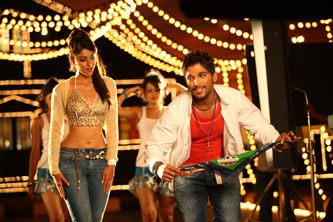 The promotional song for Julaayi which Allu Arjun and Devi Sri Prasad had recently shot for will be launched next week. The duo had danced for the song Pakado and it was entirely shot in Hyderabad. DSP unveiled the first look of this promotional video on Twitter. This is the first time that Allu Arjun has performed for a promotional song. Julaayi stars Allu Arjun and Ileana in lead roles and Rajendra Prasad, Sonu Sood will be seen in important roles. Trivikram Srinivas has directed the film and N Radhakrishna has produced it. Devi Sri Prasad has composed the music. The film is going to release all over South India in a big way on August 9.